The Princess Alexandra National Park is a 6532 acres (2643 hectares) coastal and marine national park located off the northern and eastern coasts of the island of Providenciales in the Turks and Caicos.

Included in this protected area is Grace Bay Beach, the Bight Beach, the Bight Reef (Coral Gardens), Leeward Beach, Smith's Reef, and a large portion of the northern barrier reef of Providenciales. Also inside is the Princess Alexandra Nature Reserve, which consists of the iguana sanctuary of Little Water Cay (Iguana Island), the wetlands islands of Mangrove Cay and Donna Cay, and the rocks of Lizard Cay, Bird Cay, and the Sinking Cays.

Declared a national park in 1992, the Princess Alexandra National Park is highly important to tourism industry in the Turks and Caicos, and most of the resorts on Providenciales are located on or near Grace Bay Beach in the national park. Much of the water sport use occurring around Providenciales, including kayaking, clear kayaking, paddleboarding, sailing, and snorkeling, also occurs here.

Many of the busy dive sites around Providenciales are also found on the northern barrier reef in the Princess Alexandra National Park, due to the ease of access from the resorts, Turtle Cove, and other marinas on the island.

Aerial view of paddleboarders in a tidal channel at Mangrove Cay.

The Princess Alexandra Nature Reserve is a collection of small uninhabited cays on the eastern side of the national park. In the Turks and Caicos, nature reserves have additional protections under the law than national parks due.

The main islands in the nature reserve are Little Water Cay, Mangrove Cay, and Donna Cay, all three of which support significant populations of the endemic iguanas. These cays and wetlands are also home to a full spectrum of marine and bird life. The red mangrove systems at the cays support a menagerie of juvenile wildlife, including nurse sharks, lemon sharks, hawksbill turtles, conch, stingrays, starfish, many types of reef fish, green herons, brown pelicans, and more.

The Best Things to Do in the Princess Alexandra National Park

Beautiful Half Moon Bay in the Turks and Caicos.

The Princess Alexandra Nature Reserve is home to a wonderful range of beaches and things to do, and is the perfect playground for a wide array of water sports.

First and foremost in the national park is the world-famous Grace Bay Beach, an unrivaled stretch of spectacular white sand and turquoise ocean water. Grace Bay is a must-see of any visit to the Turks and Caicos, and there are many public (and free to access!) beach accesses along the span of the beach.

Leeward Beach, which starts where the eastern edge of Grace Bay ends, is likewise an incredible beach, and offers better seclusion as well. The western end of Leeward Beach is simply a perfect and wide beaches, and is progressively interrupted by occasional rock jetties and natural rock outcroppings as it leads east. The eastern end terminates as Emerald Point at Leeward Going Through channel near Little Water Cay, which is a very picturesque area.

The Bight Reef, also known as Coral Gardens, borders the western edge of Grace Bay Beach, and is the most popular beach snorkeling reef on Providenciales. This system leads directly off the beach and continues out for quite a distance. A wide assortment of reef fish and turtles are almost a guaranteed sighting of any visit.

The Bight Beach continues from the Bight Reef, and is another top beach on Providenciales. Due to a change in the coastline, this beach is typically a little more sheltered than Grace Bay from the eastern trade winds, so it’s often calm close off the beach.

Smith’s Reef is a complex beach reef system that front the Turtle Cove region of Providenciales, and offers several distinct underwater terrains to explore. The best system is found a bit offshore, yet many interesting coral head can be found very close to the beach.

The highly-scenic Half Moon Bay beach and lagoon is one of the top sights in the Turks and Caicos. This sandbar and beach filled in what was once Donna Cut channel between Water Cay and Little Water Cay, yet today offers a wide and incredible beach and shallow and sheltered lagoon.

For good reason, Half Moon Bay is probably the single most frequented boat trip destination in the Turks and Caicos.

Little Water Cay is the best known rock iguana attraction in the Turks and Caicos, and offers beautiful little beaches and boardwalks for seeing the iguanas in their natural environment.

Mangrove Cay is the single most popular wetland kayaking and paddleboarding destination, primarily due to its ease of access from Providenciales. This wetland island has a couple mangrove tidal estuaries, where most eco tours to the area visit.

Last but not least is the barrier reef the edges the northern side of the Princess Alexandra National Park. This reef system serves the critical job of protecting Grace Bay and the other beautiful beaches in the park, and is exquisite for scuba diving and snorkeling. About a dozen popular dive sites line the reef.

Snorkeling is an activity that almost anyone can do, and the Leeward Cut are of the barrier reef is typically a very busy place, hosting charter and tour boats of every type. This underwater playground is home to a spectrum of reef fish, dense beds of yellow and purple sea fans, and intricate coral formations.

Environmental Changes over the Years

Most of the resorts on Providenciales can be found in the Grace Bay area on the edge of the national park.

The Princess Alexandra National Park has had several influences over the last twenty years. Constant power vessel use, eutrophication caused by landscaping and sewage runoff from resorts and other structures, drudging in the eastern end of the national park, and a failed Dubai-style artificial island development near Mangrove Cay have at different times churned up sediment and damaged coral in the area.

The conch population in the park has also significantly declined over the years. In the mid-90s, it was common to see large mature conchs out in the seagrass in the Bight and Turtle Cove areas, yet today they are virtually non-existent due to poaching.

The population of invasive lionfish has also increased. These fish are an invasive predatory species from the Indo-Pacific and are quite damaging to the fish and reefs in the Atlantic and Caribbean. The fish are predators and although only reaching a mature length of about 14 inches (35 cm), they consume an incredible amount of the smaller reef fish.

Dangers and Hazards in the National Park

The Turks and Caicos Department of the Environment and Coastal Resources (DECR) is responsible for enforcing the law, licensing local tour operators, and maintaining swim zones and marker buoys. Please contact them to report irresponsible behavior and dangerous conditions.

Most of this behavior is by small vessels offering banana boat and wake rides. Changes in the law require that such boats have a dedicated spotter. However, this is often not followed and it’s important to be aware of them. 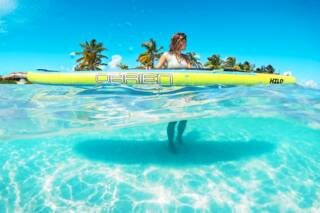 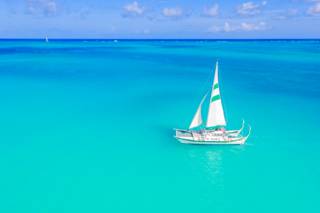 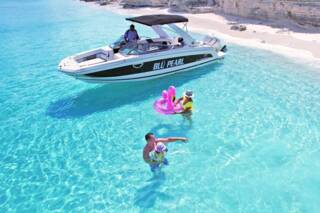 Island Adventure TCI
Island Adventure TCI is a small and locally-owned eco-tour company that specializes in clear kayak wetland tours and private boat charters. Excursions are family-friendly, and are great for experiencing the natural beauty of the Turks and Caicos.
Learn More