Providenciales
Tour Companies
Map
Beach Information
Do Not Touch Fish or Coral
Dogs Must be on Leash
No Lifeguard
No Littering
No Loud Music or Noise
No Open Fires
Editor's Comments
Taylor Bay is a scenic cove that offers calm and shallow water, making it an excellent beach to visit with children. This beach is typically far less busy and more tranquil than the nearby Sapodilla Bay, where beach vendors are found.
5-star rating for Taylor Bay by Visit Turks and Caicos Islands
Taylor Bay Beach in the Turks and Caicos Islands.

Taylor Bay is found off the south coast of Providenciales, near Chalk Sound and west of Sapodilla Bay. This scenic beach isn't extensive at only about 2000 feet (600 meters) long. Sheltered by the small Ocean Point peninsula from the regular southeast trade winds, the water here is very shallow, calm and clear and is consequently an excellent beach choice when visiting with small children.

This beach can be very interesting during very low tides as due to the very shallow water, large patches of sand with intricate patterns are exposed at times.

Quite a few rental vacation villas are located in this area, but the beach rarely sees any crowds. There’s no decent snorkeling nearby. The low sea cliffs that continue on both ends of the beach where the sand stops do shelter a few small fish and soft corals, but you’ll won’t find much more than that.

How to Get to Taylor Bay

The main access for Taylor Bay is found off of Ocean Point Drive in the Chalk Sound region of Providenciales. There’s limited parking here for about eight vehicles.

It’s not too difficult to find this beach.

After entering Chalk Sound Drive from South Dock Road, continue .8 miles (1.31 km) to Ocean Point Drive. The entrance to Chalk Sound Drive is at the junction opposite the fuel storage facility, and next to the small police station.

Before reaching the turn for Ocean Point Drive, you’ll pass the entrance for Las Brisas restaurant and Neptune Villas. Take Ocean Point Drive on your left and the small parking area for Taylor Bay will be on your right after about 1000 feet (300 m).

There have been some contention over the traditional beach access path for Taylor Bay, which has been gated at various times. This route traveled over what may have been private land, and there is no government-sanctioned access. At this time, the entrance is not gated.

The Turks and Caicos Government is working on a solution to the beach access issues.

Taylor Bay Beach remains public and free-to-access up to the high tide point, and access by the general public to Taylor Bay from the ocean cannot be restricted.

There is a route to the coast on its western end near the entrance to the Silly Creek neighborhood, yet this path is not an established access.

Dick Clark, famous for hosting American Bandstand and the New Year’s Eve celebration at Times Square in New York City, once owned a vacation home at Taylor Bay. The villa used to stand on the western end of the beach, yet is long gone. The coconut palms still thriving at the site were part of the landscaping at the getaway.

Dick Clark was one of a long list of famous people who visited or lived in the Turks and Caicos.

Because Taylor Bay is generally sheltered from the typical eastern trade winds, the area can have biting midges (also known as no-see-ums, or sand fleas). These annoying insects emerge in the mornings and evenings, so you may want to bring insect repellent if you plan to visit this coast near sunrise or sunset times .

Taylor Bay is one of the safest beaches in the Turks and Caicos. The water here is almost always calm, and there are typically no currents or under pulls. There may be the occasional conch, shell or small rock hidden in the sand.

Five Cays Water Sports
Five Cays Water Sports offers guided jet ski tours to many great locations on the southern side of Providenciales. Taylor Bay is just a short hop away, as are the iguana habitat of Long Cay, Sapodilla Bay Beach, and ocean cliffs and cave at West Harbour Bluff.
Learn More 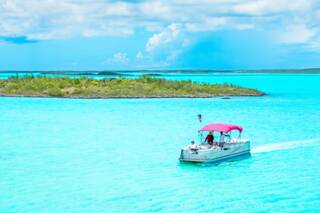 The main access for Taylor Bay Beach. Limited roadside parking can be found next to the beach path.