A taxi on the beachfront Queen Street on old Cockburn Town, Grand Turk.

Most taxis are larger vans and many are Ford E-Series vehicles. They can carry up to 7 passengers, and around 5 if there is a large amount of luggage.

The maximum speed limit in the Turks and Caicos is 40 mph (64 kph), and many roads on Grand Turk have a speed limit of 20 mph (32 kph). Throughout the Turks and Caicos, taxis and cars tend to excessively exceed the posted speed limit, which is a danger to pedestrians, cyclists, and other drivers. If your taxi driver is speeding, please ask that they remain within the speed limit. Grand Turk is a very small island, and maintaining a safe speed will only add a maximum of a few minutes to your journey.

A rental car is typically the best choice for visiting guests, due to both cost and convenience.

Although there are statutory fares for certain routes, such as from the airport, these may not be adhered to. However, there is a fare schedule for the Grand Turk Taxi Association which applies to it's members.

You are advised to agree on your fare before setting off. It's important that you clarify if the quoted fee is per passenger, or for your total group. Some taxi drivers quote a fare, and then at the final destination surprise passengers with an inflated total that is multiples of what was stated.

Fares from the Cruise Center

We recommend that you record the number of a local taxi service in case one is needed while on your trip. 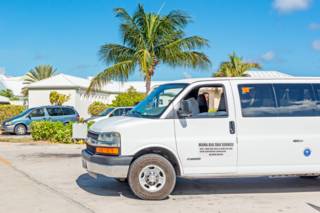 Mama Dea Taxi & Tour Servce
Mama Dea offers taxis and tour services on Grand Turk. Experience the sights and attractions of the island in air conditioned comfort. Complimentary Wi-Fi available in the vehicles.
Learn More
Patsy's Taxi & Tour Services
Informative taxi and island tours on Grand Turk by long-time local resident Patsy Taylor.
Learn More
Last reviewed by an editor on 21 April 2020.
Close Search
What in the Turks and Caicos are you looking for?
Type your search terms and pause for instant results.